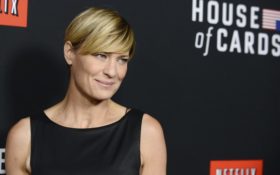 The trailer for the next season of “House of Cards” is missing Kevin Spacey and declares: “The reign of the middle-aged white man is over.”

The trailer released Thursday depicts Robin Wright’s Claire Underwood taking over as president after her husband’s death in the Netflix series.

Spacey, who played the late President Frank Underwood, was fired from the show after several employees accused him of inappropriate behavior.

And actor Anthony Rapp last year accused Spacey of sexual misconduct when he was 14 and Spacey was 26. Spacey tweeted an apology for what he labeled drunken behavior.

The sixth and final season of “House of Cards” will be available on the streaming service Nov. 2.