Neighbor's pet snake winds slithering up in the wash! - The Horn News 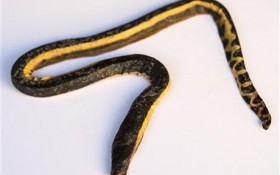 An escaped pet snake that apparently slithered into a suburban Chicago family’s washing machine ended up smelling like fabric softener after going through the wash.

Sanela Kamencic tells WMAQ-TV she was “totally creeped out” when the snake turned up Wednesday in the washing machine in Evanston.

Police Officer Pedro Carrasco and Animal Control Warden Jason Pound brought the reptile to the Chicago Exotics Animal Hospital. Carrasco says it was “peeking its head out of the washing machine” when they found it.” Pound says it “smelled like Downy” after surviving the wash cycle.

The animal hospital says the corn snake, named Penelope, belonged to a 12-year-old boy who lives nearby. They were reunited afterward.