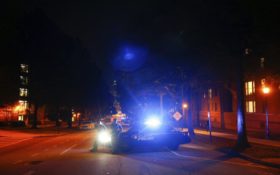 A large fire burned Monday inside a chemical plant on the coast of Georgia, where authorities ordered nearby neighborhoods to evacuate because of threats from toxic smoke and potential explosions.

Emergency responders safely evacuated a small handful of employees working when the fire broke out at about 4 a.m. Monday at the plant outside the port city of Brunswick, Georgia, said fire Capt. Eric Proswimmer, who was on the scene with fire crews from Jacksonville, Florida, sent to help battle the flames. The plant is located about 70 miles (113 kilometers) south of Savannah.

The fire sent a large plume of thick smoke into the air. As a precaution, local emergency officials ordered neighborhoods within a 1-mile (1.6 kilomter) radius of the plant to evacuate, said Glynn County government spokesperson Katie Baasen. People within a 3-mile (5-kilomter) radius were told to shelter in place.

Baasen said officials were mostly concerned about hazards posed by smoke drifting into populated areas. But she said there was also potential threat from explosions.

Proswimmer said heat from the fire had caused three metal tanks containing chemicals to explode, prompting firefighters to back away. He said firefighters had exhausted more than 1 million gallons (3.8 million litres) of water stored in tanks on the site, further complicating efforts to fight the blaze.

“It’s not widespread, it’s not crazy right now,” Proswimmer said of the fire. “But we’ve got chemicals that are hazardous and we are staying back from them at this time.”

He said one firefighter suffering from exhaustion had been taken to a hospital, but there were no other injuries.

The plant is operated by Symrise, a company based in Germany that produces fragrances, flavoring and other ingredients for foods and cosmetics. The company said in a statement Monday the cause of the fire was not known.

“Currently, Symrise has no reason to believe that the fire will cause additional health hazards to the local community,” Symrise’s statement said. “Symrise will closely cooperate and support local authorities in analyzing the causes for the fire as soon as the authorities allow return to the area.”

Proswimmer said an investigation would be conducted after the fire was extinguished.