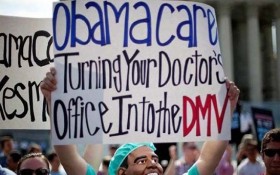 Figures released Thursday by the Centers for Medicare and Medicaid Services show that about 3.2 million people have signed up so far for subsidized private insurance, compared with about 3.6 million at the same time last year.

Health law supporters are concerned. The number of new customers is down nearly 18 percent.

Many Democrats blame the Trump administration for the slippage, but independent experts say there may be other reasons, too. In a strong economy people are more likely to find jobs with coverage.

Most of the estimated 10 million currently enrolled will have their coverage renewed automatically.