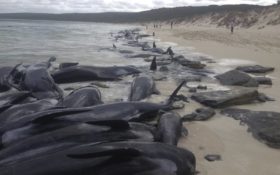 More than 150 whales have become stranded in Hamelin Bay in western Australia, and only 15 of them were still alive on Friday, authorities said.

The mammals are believed to be short-finned pilot whales.

The stranded animals were first spotted by a commercial fisherman early on Friday morning.

As of Friday afternoon, only 15 whales were alive. A rescue operation was underway to try and herd them back to sea. Authorities say palliative care will be administered where necessary.

“I think it’s absolutely incredible, I’ve never seen anything like it, seen so many whales beached like this,” said Barrie Brickle, a tourist visiting the area.

A shark alert has been issued by the Fisheries Department as the stranded whales may attract the ocean predators.

“Unfortunately, most of the whales beached themselves on dry land overnight and have not survived,” rescue team leader Jeremy Chick said. “Rescue operations will be hampered by deteriorating weather conditions and we need to ensure the safety of everyone involved before we move the whales.”

The carcasses were being removed from the beach, with Parks and Wildlife Service officers taking DNA samples in an attempt to collect clues about why whales strand.

The biggest mass stranding of whales in Western Australia happened in 1996 in Dunsborough. That year, 320 long-finned pilot whales beached themselves.