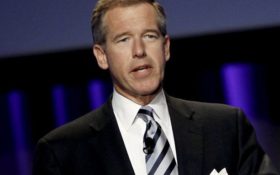 Williams tried to use the moment to push his liberal narrative that guns — not mental health — was to blame for the unthinkable tragedy.

What the young man said to him totally shut Williams down, and the NBC anchor was forced to quickly change the subject.

“If you were a lawmaker, an adult in a decision-making position, how would you stop, do you think, the kind of thing that happened today? A kid who’d been thrown out… he comes back with a weapon, and takes out whatever grievance he’s been walking around with in his head,” Williams asked Brandon Minoff, a senior at Marjory Stoneman Douglas High School.

“Gun-wise I don’t think there’s any way to prevent it. You outlaw guns it just creates a higher demand for it,” Minoff replied. “I think it has to do with mental health, though. If he’s been expelled three different times from three different schools, I think he needs to be helped out.”

It’s good to know that some young people are still sharp and aware to the media spin.

Watch their exchange for yourself —