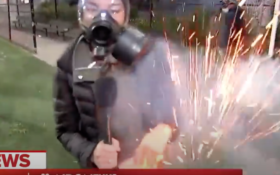 Journalists all across the country have shown bravery in reporting live from the epicenters of ongoing chaos in America throughout the peaceful protests, rampant looting and clashes between civilians and law enforcement.

But reporters have increasingly become targets in the violent riots.

And Monday during a live broadcast on national television, an NBC News reporter was caught in the crossfire.

Anchor Jo Ling Kent corresponding live in Seattle, a city that had experienced four days of rioting, when she was hit by a projectile.

Kent and her crew had taken refuge at a baseball field during what appeared to be a tense moment of fireworks and flashbangs set off around the camera crew. Protesters can be heard in the scramble as the NBC News team is trying to find a spot to safely report.

You can watch the stunning video below, which shows the moment the device explodes on Kent’s arm:

Kent was immediately rushed to a safer area after the incident, and the in-studio anchor Brian Williams reassured viewers that a security team was with her. She regained composure enough to try to continue reporting on the unfolding catastrophe, before finally being guided away from the raucous.

Kent later tweeted that although the grenade explosion looked bad, she and her team were not harmed.

“Hey everyone. Thankfully, our whole team is ok and safe,” she wrote. “I’m totally fine – my jacket sleeve got singed and that’s it. So sorry for the curse words.. and thank you for the sweet texts, calls and tweets.”

Hey everyone. Thankfully, our whole team is ok and safe. I’m totally fine – my jacket sleeve got singed and that’s it.

So sorry for the curse words.. and thank you for the sweet texts, calls and tweets ❤️ https://t.co/WQdtxU4FIz