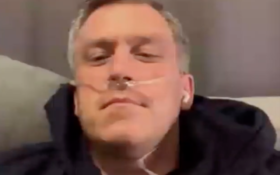 The most extreme anti-President Donald Trump news operation in the country has been caught in the middle of a vast Fake News scandal spreading coronavirus hysteria.

NBC reported that its “science contributor” Dr. Joseph Fair had been hospitalized for COVID-19, even though he was relatively young and healthy.

But the medical results have come back — and they prove that Fair has never even had the coronavirus.

Fair told NBC’s Today show that he caught the virus on an airplane flight, even though he followed all the government recommendations to protect himself.

“I had a mask on, I had gloves on, I did my normal wipes routine,” Fair said on the network — from his hospital bed — on May 14.

“Obviously,” he added, “you can still get it through your eyes,” since he “wasn’t wearing goggles on the flight.”

NBC and MSNBC interviewed Fair at least 10 times as an expert with firsthand knowledge of the coronavirus, but it turns out it was all a ruse.

A blood test shows that he tested negative for the antibodies, meaning he has never had the coronavirus.

The news shouldn’t have blindsided NBC, since Fair tested negative for COVID-19 in four tests overall.

Instead of questioning its “expert” virologist, and his unverified claim that Americans should wear goggles in public in addition to a facemask, NBC hosts said the tests got it wrong.

“Every time it came back negative, but clearly you have it,” “Today” host Hoda Kotb told her millions of loyal, believing viewers. Her co-host, Craig Melvin, told NBC’s audience that Fair had gotten “false negative tests” — and called the results “scary.”

Savannah Guthrie even called the result “a cautionary tale” about how science could get it all wrong. Now Fair says his “undiagnosed/suspected COVID illness from nearly 2 months ago remains an undiagnosed mystery.”

My undiagnosed/suspected COVID illness from nearly 2 months ago remains an undiagnosed mystery as a recent antibody test was negative. I had myriad COVID symptoms, was hospitalized in a COVID ward & treated for COVID-related co-morbidities, despite testing negative by nasal swab.

Instead of admitting he and NBC got the story wrong, Fair is still hinting that the test is faulty. “There are definitely ‘issues’ with some of the tests & little regulatory oversight on the antibody tests in particular,” he tweeted. “Just to be sure I’m going to go with a different maker.”

There are definitely “issues” with some of the tests & little regulatory oversight on the antibody tests in particular. I also had acute & diffuse lung injury from this infection; that’s what hospitalized me. Very thankful to have no apparent long term issues yet.

The phony Fair fiasco has taken a major toll on NBC’s credibility.

“First, that an expert virologist can take every precaution but can still catch COVID-19 through his eyes,” and “second, that tests can be so untrustworthy that you can have multiple negative tests and still have coronavirus.”

What NBC did could be dangerous, not just by spreading lies but by convincing healthy people they have the deadly virus.

“I was a very healthy person. I exercise five to six days a week,” the 42-year-old doctor said on NBC. “If it can take even me down, it can take anybody down.”

Medical experts say that kind of hysteria is filling hospital beds with patients who have convinced themselves they have the coronavirus.

A 16-year-old boy had to be hospitalized after he made himself believe he got COVID-19.

The boy was just fine after doctors gave him anti-psychotic and anti-depressive medicines. But he’s not alone.

Even the World Health Organization has had to admit that coronavirus panic is an increasing problem.

“Just the fact of someone wondering if he is positive for COVID” can create panic, says Dr. Konstantinos Petsanis, a Greek-born specialist who works near WHO headquarters in Switzerland.

“We know very well that panic leads to bad behavior and to psychosomatic problems as well, and that brings on somatic (physical) problems very, very easily,” Dr. Petsanis said, “and we have to be careful and delicate with how we handle this.”

But NBC and MSNBC don’t think they have to be careful how they handle these cases during a global pandemic: Their false coverage helps create hysteria, panic, and spread scientifically inaccurate information.