NBA superstar to save the day? - The Horn News 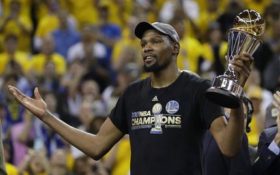 The Golden State Warriors hope he will again on Monday.

With the Warriors’ backs to the wall now in the NBA Finals, Durant — now out for more than a month with a strained calf — was taking the practice floor on Sunday in an effort to determine if he will be able to play in Game 5 of the title series on Monday night.

The Warriors trail the Toronto Raptors 3-1 in the series, and need three straight wins to capture a third straight championship.

“He’ll get some extra work in with some of our younger players and we’ll gauge it from there,” Warriors coach Steve Kerr said.

Durant was not made available to comment. The Warriors had their media availability in Toronto on Sunday prior to the practice session. Durant averaged 26.0 points per game for the Warriors during the regular season and 34.2 points in 11 playoff games before he got hurt in Game 5 of the Western Conference semifinals against Houston.

The Warriors are 6-3 in the nine games Durant has missed.

“It’s just having another powerful weapon out there who can do some very dynamic things on the floor,” Warriors guard Stephen Curry said.

Kerr said the plan was to see if Durant could clear some hurdles that he hasn’t crossed during his recovery. Kerr said earlier in the series that Durant could return after completing one practice.

“He will be very welcomed, I’ll tell you that much,” Warriors guard Klay Thompson said. “I think it’s pretty easy to realize we obviously miss him out there. He’s propelled us to two championships in the last two years, so it’d be pretty storybook if he comes back and helps us do the same. … I know how badly he wants to be out there. He’s one of the best competitors I’ve ever been around.”

Toronto allowed Kobe Bryant to score 81 points on Jan. 22, 2006. In the 1,175 Raptors games since, the most anyone has scored against them is 51 points — done twice, done both times in Toronto, and done both times by Durant.

He had 51 for Oklahoma City in Toronto on March 21, 2014, and scored 51 for the Warriors on the Raptors’ home floor back on Nov. 29. Even if he isn’t 100%, Durant’s mere presence should make the Warriors more potent on the offensive end.

The Raptors will have a plan, of course, if Durant gets on the floor Monday night.

“If he plays, he’s an MVP, he’s an All-NBA player, he’s an All-Star, Finals MVP,” Raptors guard Kyle Lowry said. “But we can’t focus on that. We have to focus on ourselves.”