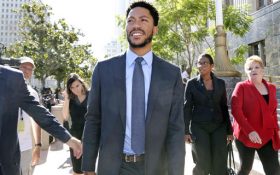 Derrick Rose is at a crossroads in his basketball career and one of the biggest moments in what could be a make-or-break year for the former NBA MVP didn’t happen on the court.

It happened in a court.

Rose was vindicated Wednesday in a $21.5 million lawsuit that accused him and two friends of raping an ex-girlfriend when she was incapacitated from drugs or alcohol.

The reticent Rose, who remained stoic most of the trial including during his testimony about intimate sex acts, smiled outside court, thanked jurors and put his arm around some who posed for photos with the hoops star.

“I am thankful that the jury understood and agreed with me,” Rose said in a statement. “I am ready to put this behind me and focus on my family and career.”

Jurors in Los Angeles federal court had sat through graphic testimony with somber expressions, but it took them less than four hours to conclude there was a lack of evidence to support the woman’s claims and dismiss her account as unbelievable.

“It felt like she was playing us,” said Jared, 25, one of several jurors who spoke to reporters outside the courthouse, none of whom gave full names. “The second her lawyer started questioning her, she would start crying. … That could be realistic, but I feel l’m pretty good at reading people, and I felt as if it was false.”

The case included X-rated testimony from the men about poolside group sex at a mansion Rose rented in Beverly Hills in the summer of 2013 and multiple sexual encounters throughout an August night and into the next morning.

The woman, who had previously dated Rose for less than two years, denied having sex at his place, saying she had a few tequila shots and felt drugged before going home. Her lawyer said the defense fabricated the story to make it look like she had willingly had sex with all three men.

Her testimony was impaired by a blackout that erased most memories of the night except for “flashes” that included the three having sex with her at her apartment as she slipped in and out of consciousness.

The woman pieced together events of the night by reviewing text messages to Rose, but the defense used those to say she was lucid and sober and had been angling for sex throughout the day and had invited him over.

The issue for the jury was whether she consented to sex or was too intoxicated to do so. The men all said she was alert and willing when she stopped the three outside her bedroom door and said, “One at a time.”

The tense two-week civil trial sidelined Rose during several preseason games with the Knicks as he attempts to prove himself with the new team and rebound from major knee injuries that hurt his career with the Bulls in his native Chicago.

Rose, 28, is in the final year of a five-year deal that will pay him $21.3 million and the case threatened more than his bank account and reputation. Defense lawyer Mark Baute told jurors a lot was riding on their decision.

Any finding he had sexually assaulted the woman could have violated a morals clause in his player contract and a lucrative deal with Adidas and jeopardized his career and the future of family and friends who rely on him for financial support, Baute said.

Defense lawyers tarred the woman as a gold-digging liar who tried to sway jurors through emotions. They claimed she was angry he had dumped her, so she set him up and brought the lawsuit in hopes of a big payoff.

They portrayed Rose and his childhood pals, Ryan Allen and Randall Hampton, who both work for him, as victims in the case.

“All three men were innocent from Day 1,” Baute said.

The woman’s lawyer called the men “sexual deviants” who conspired to gang rape her after she was drunk and incapable of consenting to sex. Attorney Waukeen McCoy said the case wasn’t about money, but about holding the men accountable for moral and legal wrongdoing.

Los Angeles police have an open investigation into the woman’s claims.

The Associated Press does not generally name people who say they are victims of sex crimes.

The accuser, who had become emotional and trembled at times while testifying, buried her head in her hands as the verdict was read. She left the courthouse without comment.

Her attorney said she was devastated and he was considering appeal options.

“It’s a shame for women, for this country, that a celebrity can come into court and slut-shame a woman like my client,” attorney Waukeen McCoy said.

After dismissing the jury, Judge Michael W. Fitzgerald offered his best wishes to the woman with her studies and to Rose in his career “except when the Knicks play the Lakers.”