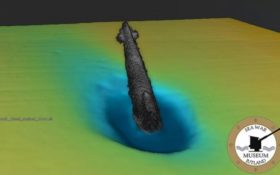 One of the biggest mysteries of World War II has just been solved after 73 years.

In the closing days of the war, with General Patton and the Soviets closing in on Berlin like two sides of a vice, some of the top leaders of the Nazi regime were looking for a way to escape.

Some of them, like Nazi doctor Josef Mendele and Holocaust architect Adolf Eichmann, fled to South America, where Israeli investigators found them years later.

But it was long speculated that top Nazi leaders – including Adolf Hitler himself – faked their deaths and secretly escaped the Allies in a high-powered submarine.

The story had been handed down for years, but no one could say for certain – until just now.

Denmark’s Sea War Museum found the submarine that Nazi officials were supposed to have used, buried in a watery grave 10 nautical miles north of the nation’s most northern city, Skagen.

The British said one of their fleet sunk the U-3523 on May 6, 1945 – just one day before the Nazis would surrender, and two days before “V-E Day,” when the Allies would formally bring the war to a close.

The Nazi U-boat belonged to a special class of ships that had the power to go all the way to South America. But only two  U-boats of that variety, called Type XXI, ever hit the seas due to major problems in manufacturing.

The British B24 Liberator said it sank the Nazi vessel just days before the end of the war, but no one could verify the story, because they couldn’t locate the ship.

“Rumor has it that the submarine had great valuables from Germany, because it was heading away from Germany even though the war ended,” the museum’s director, Gert Normann Andersen, told the British tabloid The Sun.  “I think the rumor developed, because U-3523 was a very modern, long-distance U-boat and some Nazis tried to escape with valuables in the last days.”

But that wasn’t the case with this one. “The submarine was going to Norway, and not to South America with Nazis and valuables,” he said.

Hitler committed suicide in his secret underground bunker on April 30, 1945. The Red Army discovered his body, along with his mistress Eva Braun, and buried him in an unmarked grave after the war.

That hasn’t kept the conspiracies that Hitler survived and lived a long life from crisscrossing the globe from that day forward.

According to one theory, he surfaced in South America from a submarine.

The CIA even got wind of these rumors in the 1950s, where a recently declassified document has a picture of someone who looks startlingly like Der Fuehrer.

A former member of the SS named Phillip Citroen told U.S. intelligence in 1954 that Hitler was alive and well in South America.

Citroen said Hitler changed his name to “Adolf Schuttlemayer” and lived in Colombia in the town of Tunja, north of Bogota.

He said he met the man, who claimed to be Hitler, in a complex full of ex-Nazi soldiers who still worshipped him.

“According to Citroen, the Germans residing in Tunja follow this alleged Adolf Hitler with an idolatry of the Nazi past,” the CIA reported, “addressing him as Elder Fuhrer and affording him the Nazi Salute and storm-trooper adulation.”

The story just laid there until a year later, when a second source came forward.

In 1955, a man codenamed “Cimelody-3” told American intelligence agents that he had regularly met with “Hitler,” according to a newly declassified document.

The informant even managed to have his picture taken with the man, who bears a stunning resemblance to Hitler. You can see the photo, and read the whole report, here.

Germany did not officially declare Hitler dead until 1956.

Top researchers from France recently examined the remains of Hitler, which the Russian government has kept in its possession since 1945, and concluded: “There is no possible doubt. Our study proves that Hitler died in 1945.”

But rumors may continue to surface for awhile, since the empty U-boat is buried beneath 400 feet of water. The front of the U-boat is buried in the sand, and the rear, or stern, is 65 feet above it. Evidently, it capsized and went in a straight nosedive.

The boat is buried, and phony stories about Hitler surviving the war should be buried with it.