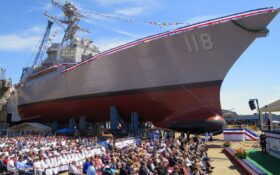 The late Sen. Daniel Inouye, D-Hawaii, was serving as a medical volunteer in the military during the attack on Pearl Harbor.

On Tuesday, the event’s 80th anniversary, the Navy will commission a new ship: the USS Daniel Inouye.

Navy Secretary Carlos Del Toro will deliver the keynote address. He will speak alongside Inouye’s family and some Hawaii politicians.

“The late Senator Daniel Inouye spent his entire life in public service, both in uniform and out,” Del Toro said in a press release on Tuesday. “Senator Inouye’s life is one to be emulated and the crew of this warship will not only be inspired by his legacy, but will stand the watch with the honor and dignity deserving of a ship bearing his name.”

The ship was built and christened in 2019, and it was delivered to the Navy earlier this year. On Tuesday, it will be stationed at Pearl Harbor.

In the press release, the Navy described the ship as a “guided missile destroyer.” The Navy said, “They are highly capable, multi-mission ships and can conduct various operations, from peacetime presence and crisis management to sea control and power projection.”

Inouye, only 17 at the time of Pearl Harbor, was serving as a medical volunteer in the military that day. Shortly afterward, he joined the military. He lost half an arm in Italy due to an injury from a German grenade.

He won election to the U.S. Senate in 1962, and he served there until his death in 2012. He never lost an election, and he won the respect of his Republican colleagues. Senate Republican Leader Mitch McConnell placed him among the “finest” senators during an interview with Politico.

Since Inouye’s death, the U.S. government has named multiple properties after him, including the Honolulu airport. Now they’ve commissioned a ship in his name.