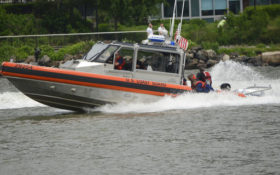 A Navy SEAL who fell to his death when his parachute failed to open during a Fleet Week demonstration over the Hudson River has been identified as a 27-year-old Colorado man.

The accident that killed Remington J. Peters occurred Sunday at Liberty State Park, a large New Jersey park across from Manhattan where people catch ferries to see the Statue of Liberty.

Peters, whose identity was revealed late Monday, was a member of an elite Navy parachute team called the Leap Frogs. He was a role model who will be “painfully missed,” his family said in a statement released by the U.S. Navy.

“He was an angel on earth and role model to all,” the statement said. “We couldn’t have been more proud of him. He lived life to the fullest and taught us to do the same.”

The cause of the parachute malfunction that killed Peters is under investigation.

Peters was among four parachutists who drifted down from two helicopters. The Navy said he was pulled from the water by the U.S. Coast Guard. His parachute landed in a parking lot.