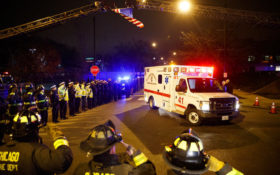 The Navy says there is no evidence of any drinking water contamination after a spill of about 1,100 gallons of fire suppressant at a fuel facility in Hawaii.

A cleanup is underway at the Red Hill fuel facility after the spill Tuesday of Aqueous Film Forming Foam, which is used to suppress fires caused by flammable liquids such as fuel and contain PFAS, a class of chemicals that are slow to degrade in the environment.

“This is egregious,” Kathleen Ho, a Hawaii environmental official, said in a news release. “AFFF contains PFAS forever chemicals — groundwater contamination could be devastating to our aquifer.”

PFAS — an abbreviation for perfluoroalkyl and polyfluoroalkyl substances — were developed as coatings to protect consumer goods from stains, water and corrosion. Studies of lab animals given large amounts of PFAS have found that some of the chemicals may affect growth and development, reproduction, thyroid function, the immune system, and the liver.

Ho said that regulators “will hold the Department of Defense accountable and will press the operator to take any and all appropriate corrective action.”