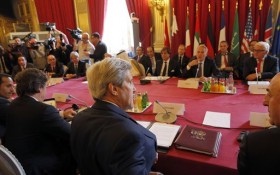 The United States said Monday that a new agreement with Russia would replace localized, piecemeal cease-fires in Syria with a revived, nationwide truce, as world leaders struggled to get faltering peace talks back on track.

U.S. Secretary of State John Kerry, in Paris for meetings on the Syria crisis, said Russia had also committed to limiting the Syrian government’s ability to fly over civilian areas. The Syrian opposition accuses President Bashar Assad’s military of violating the truce the U.S. and Russia brokered in February by bombing those areas. Kerry said the U.S. and Russia had shared their announcement with the other countries participating in stalled talks to end Syria’s long-running civil war.

But Kerry cautioned that the agreement itself meant little if it was not backed up by the parties on the ground.

“These are words on a piece of paper. They are not actions,” Kerry said. “It is going to be up to the commanders in the field and the interested parties — which includes us.”

It was unclear whether the announcement would effectively stem the violence, or whether Russia and Syria even saw it the same way. A joint U.S.-Russia statement made no explicit reference to ending the practice of pursuing partial truces.

Recognizing the difficulties in maintaining truces — known in diplomatic parlance as “cessations of hostility,” the joint U.S.-Russian statement said, “We have decided to reconfirm our commitment to the CoH (cessation of hostilities) in Syria and to intensify efforts to ensure its nation-wide implementation.”

The U.S. and Russia have been working to put the truce back together through a series of short-term cease-fires in cities where heavy violence has broken out, including the northern city of Aleppo, Syria’s largest city. U.S. officials said those localized efforts had made progress in reducing violence and were now being “folded into” the nationwide truce, eliminating the need for incremental extensions in specific cities.

In Aleppo, cease-fire that was extended over the weekend was set to expire just a few hours after Kerry spoke, raising questions about whether fighting would break out anew in the absence of a formal declaration of another extension. While Kerry was holding talks in Paris, airstrikes and shelling hit several areas in Aleppo, where hundreds of civilians have been killed in recent days, Syrian state media and opposition monitoring groups said.