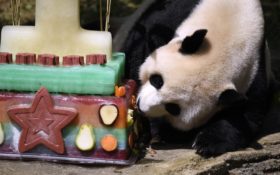 Paws are crossed at the Smithsonian’s National Zoo in Washington, where a panda baby watch is underway.

Officials closed the David M. Rubenstein Family Giant Panda Habitat on Sunday to give Mei Xiang some quiet time because she’s exhibiting behaviors that are in line with both a pregnancy and false pregnancy.

Keepers can’t confirm if she’s pregnant. However, Mei Xiang is building a nest near her den, has decreased appetite, is sleeping more and is reacting to loud noises.

The zoo says pandas can have pseudo pregnancies in which they do everything they would if they were pregnant. However, hormone levels and their behavior eventually return to normal.

Outdoor habitats and viewing areas remain open for people to see the zoo’s other pandas, Bei Bei and Tian Tian.