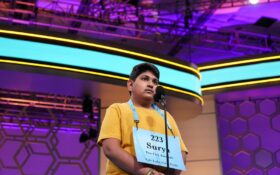 A speller has been reinstated into the Scripps National Spelling Bee field after successfully appealing that he was denied relevant root information about a word.

Surya Kapu, a 13-year-old from South Jordan, Utah, misspelled “leucovorin” — a medicine used to counteract the side effects of a cancer drug — during Wednesday night’s last semifinal round, appearing to end his run in the bee just short of the finals.

Surya’s family appealed, arguing that Scripps omitted details when he asked a question about the word’s roots. Spellers are permitted to ask questions about roots, and judges answer in the affirmative if a speller can identify a relevant root and its meaning.

Scripps said in a statement its judges met for roughly two hours before deciding late Wednesday night to reinstate Surya.

“The judges’ decision to reinstate is backed by a belief in the bee’s mission to inspire the exploration of words and celebrate academic achievement,” the statement said. “Upon further review, it was determined that there was more directly relevant information available in the dictionary to one of the speller’s questions. Based on this, Surya will be provided a chance to participate in Round 7 with a new word.”

What that means in practice: Surya will get his new word at the beginning of Thursday night’s finals. If he spells that word correctly, he will join the 12 finalists who have already advanced to compete for more than $50,000 in cash and prizes.

Surya has an accomplished spelling resume and is a pupil of Cole Shafer-Ray, the 2015 runner-up who coached last year’s champion, Zaila Avant-garde.

Reinstatements are rare but not unprecedented.

The last happened in 2018 when a competitor spelled a word’s homonym correctly without having been given the definition or told that a homonym existed.