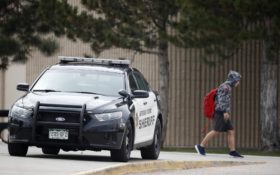 Two Oregon protesters have been sentenced to five days in jail for throwing horse lubricant mixed with gold glitter on two police officers at a protest.

The Multnomah County District Attorney’s Office says the defendants were protesting against a rally organized by a right-wing group called Patriot Prayer when the officers asked to see what was in two 4-gallon (15-liter) buckets they were carrying.

Prosecutors say Robert Majure and Tristan Romine-Mann instead sprayed the slimy liquid on the officers and ran.

Prosecutors say the two attempted to “fist bump” in celebration after they were arrested and cuffed in a patrol car.

A jury convicted them of harassment and acquitted them of a charge of disorderly conduct.

Horse lubricant is a gel used in obstetric and rectal procedures on large animals.