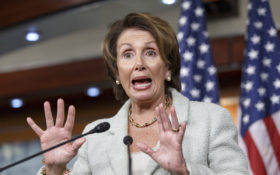 House Minority Speaker Nancy Pelosi s fearful that a strong economy will help President Donald Trump in the polls… so she’s rooting against American workers. On Thursday, Pelosi attempted to undercut the current economic climate in the United States – and failed miserably.

In a press conference, Pelosi claimed that the economy was not doing well – despite the current unemployment rate of 3.8%, the lowest rate in 50 years.

She tried to downplay Trump’s economic success by suggesting that the unemployment rate was not important, and that only consumer confidence matters.

“So, this isn’t just about the unemployment rate, it’s about wages rising in our country, so that consumer confidence is restored,” Pelosi continued.

She also told that only the Democrats’ plan can help the economy… despite the two-year long economic upswing that had the The New York Times saying, “We Ran Out of Words to Describe How Good the Jobs Numbers Are.”

“Our economy will never fully reach its possibilities unless we increase the consumer confidence and that can only be increased by a better deal, better jobs, better wages, better future, and lowering costs to families — whether its prescription drugs, by really lowering the cost of prescription drugs — and that list goes on,” Pelosi said.

She failed to mention, of course, that consumer confidence is at an 18-year-high thanks to Trump’s policies. Try again, Nancy!

You can see the outrageous video below for yourself: