NASA just launched a fruitcake into space... here's why - The Horn News 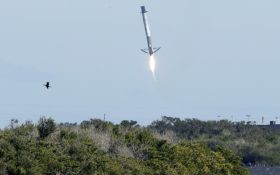 Christmas turkey rocketed toward the International Space Station on Wednesday, along with cranberry sauce, candied yams and the obligatory fruitcake.

The Dragon capsule and its 5,600 pounds of cargo should reach the space station Saturday.

“What a great day for a launch,” said Kennedy Space Center director Bob Cabana. Twenty years ago this week, Cabana commanded the shuttle mission that carried up the first U.S. part of the space station.

Besides smoked turkey breast and all the other fixings for Christmas dinner, the delivery includes 40 mice and 36,000 worms for aging and muscle studies.

Researchers expect a tenfold increase in the worm population. There will be plenty of room on board for all the tiny nematodes. It turns out their muscles are similar to ours in structure and function, making them perfect lab substitutes, said lead scientist Timothy Etheridge of the University of Exeter in England.

The launch was delayed a day when NASA discovered that the food for the mouse-tronauts was moldy. More food had to be rushed in from California.

Just two days earlier, three astronauts arrived at the space station to join the three already there. The crew includes two Americans, two Russians, one German and one Canadian. The newest residents will remain on board for six months, while the others will return to Earth on Dec. 20.