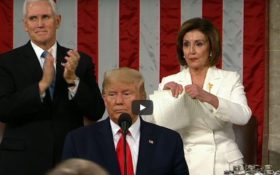 President Donald Trump stood before Congress as he delivered his State of the Union address in the grandeur of the Capitol.

It was delivered on the eve of his impeachment acquittal and at the beginning of the Democratic race to try to deny him a second term.

A president who flouts convention and tradition, Trump appealed to voters by asking them to reward the substance of his term even if they reject his style. He sought to answer a question that may not even have crystallized in voters’ minds yet: Is America great again?

“Three years ago, we launched the great American comeback,” Trump opened, with his signature brand of triumphalism. “Tonight, I stand before you to share the incredible results.”

Despite having the microphone, though, the greatest help in appealing to voters came from an unexpected source: House Speaker Nancy Pelosi, D-Calif.

At the end of Trump’s speech, Pelosi stole the headlines by standing up and ripping the State of the Union address in half.

The political protest was widely panned by voters and critics.

“Nancy Pelosi disgraced herself, her title, the US Congress, and our great country with this disgusting response at the end of the President’s State of the Union address tonight.,” Rep. Lee Zeldin, R-N.Y., said. “She should be stripped of her gavel by the American public this November.”

On Twitter, the hashtag #PelosiTantrum was the number one trending topic from Tuesday night through Wednesday morning.

The White House responded by issuing the following statement —

One of our last surviving Tuskegee Airmen.

The survival of a child born at 21 weeks.

The mourning families of Rocky Jones and Kayla Mueller.

A service member's reunion with his family.

How voters assess the stunt, and the speech, will have direct implications for Trump’s reelection prospects in November. No longer a political outsider, he faces voters with a record, one that can be compared to the promises he made during the 2016 campaign and the flourishes he frequently uses to herald administration achievements.

The State of the Union came at a high point for Trump.

After a bruising impeachment case, he will be acquitted Wednesday with the full support of the Republican Party. Democrats launched their bid to challenge him in disarray, with the Iowa Democratic Party struggling to release results amid technical challenges.

Meanwhile, Trump’s reelection campaign is blowing past fundraising records and his polling is holding steady.

His speech put the economy front and center, highlighting low unemployment and the health of the manufacturing sector under his presidency.

Republicans argued that any economic success is now Trump’s to tout.

“Trump gets to own it and he did,” said Dave Kochel, a Republican political strategist.

The president’s speech also included carefully calibrated overtures to many of the key constituencies he will need to win four more years in the White House. An emotional reunion of a deployed solider and his family; a push for school choice and a ban on late-term abortions to appeal to evangelicals; and the mid-speech awarding of the Presidential Medal of Freedom to conservative talk radio host Rush Limbaugh.

“Aimed at the middle but enough red meat to keep the right marching along,” GOP consultant Chris Wilson said.

Trump appeared to be acutely aware of that dynamic, telling news anchors during a traditional pre-speech lunch that the address would be “extraordinarily low-key.” And indeed he eschewed his regular attacks on the Democrats who impeached him and will vote unsuccessfully to convict and remove him from office on Wednesday.

In response, the night ended with Pelosi dramatically ripping up the text of his speech as he exited the chamber to raucous applause.

It was a dynamic the White House anticipated and welcomed, believing it painted Democrats as rooting against the gains Trump was claiming.

With the election shaping up to be a battle between Americans’ assessment of how they feel about the state of the nation under Trump and whether they can sustain four more years of his unconventional presidency, it’s little surprise that answering that first question — Is America great again? — formed the backbone of Trump’s address.

His campaign hopes voters will view the question as a version of the question Ronald Reagan asked a week before the 1980 election: Are you better off than you were four years ago?

In an effort to shape the answer to that question, Trump used the speech to highlight his efforts to bring down prescription drug prices, his administration’s record spending on defense and the passage of paid family leave for new parents in the federal workforce. He called for bipartisan action on infrastructure spending and touted reductions in opioid deaths in the upper Midwest states that were among the hardest hit by the nation’s drug crisis — and hold the key to his reelection.

“Our ancestors built the most exceptional republic ever to exist in all of human history,” Trump said. “And we are making it greater than ever before!”

A message, it seems, Pelosi doesn’t want voters to hear.