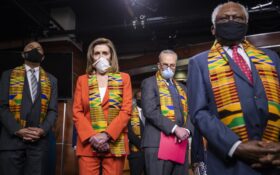 House Speaker Nancy Pelosi, D-Calif., and the Democrats thought they were putting on the perfect photo-op.

But the’ve been roundly criticized in what critics have called a political fiasco.

But it wasn’t what they did that landed them in hot water.

It was what they wore.

Critics pointed out that the lawmakers might’ve gotten a little carried away with the solidarity stunt, as they were all seen wearing Kente Cloths around their necks, a traditional African garb from Ghana.

The fashion statement was widely panned — even by liberal sympathizers — some of whom suggested that the cloth was being used as a cheap political prop.

Liberal Daily Show host Trevor Noah confessed it seemed as though “they were trying too hard.”

“OK, I understand the symbolic gesture of kneeling to remember George Floyd,” he said. “What I don’t understand is why they had to dress like extras from Coming to America 2. In fact, a lot of people were confused about why the Democrats wore an African cloth to talk about George Floyd and police brutality.”

Everyone was texting me these Kente Cloth photos, I had to come here to make sure the Roots weren’t pranking me. I just…

And on the other side of the political aisle, Democrats found very little love either.

Conservative pundit Ben Shapiro blast the House Speaker for coordinating outfits like “power rangers,” and went on to compare to cringe-worthy moment to the past when Pelosi and company wore white for feminism during President Donald Trump’s state of the union address.

Nancy Pelosi may not be a good Speaker of the House, but at least she's good at coordinating symbolic outfits with her colleagues pic.twitter.com/P2de8cEssn

” … how do you not find this culturally appropriating?” Shapiro said. “What in the world are you doing?”

Shapiro has a point.

While Pelosi and the Democratic crew depicted kneeling were given the cloths in the first place by the Congressional Black Caucus (CBC) as a display of unity, it was an extremely shortsighted move.

That Pelosi would be so out of touch with her voters to allow this to happen, is further evidence that she’s unfit to be House Speaker.