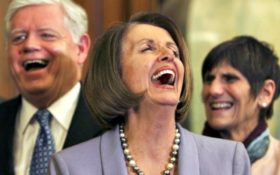 There’s a manufactured immigration crisis in the United States — but it’s not what the mainstream media will tell you about.

Instead, the crisis is the huge number of Americans who are beaten, raped, or murdered by illegal aliens thanks to liberal sanctuary city policies… and Nancy Pelosi’s latest move is enabling their sickest crimes.

Under President Donald Trump, ICE is fighting back. The border control organization has released a small, incomplete list of the thugs taken off the streets by police — then set free by Democrat politicians.

Take the city of Kent in left-wing Washington state, which protected a full-blown child molester.

In January 2014, police arrested Jorge Luis Romero-Arriaga for raping a child. ICE agents asked the city to turn him over, so they could deport him to his native Honduras. Instead, the sanctuary city turned the pedophile loose without notifying the feds.

The liberals did that even though they know that up to one-third of all child molestors rape a child again, and only about three percent of these cases end in arrest.

A year later, the illegal ended up in the slammer one more time, for “multiple counts of assault.”

It wasn’t until 2017 — when Trump came to office — that the city decided to play ball.

Sanctuary cities have no problem playing Russian Roulette with Central American rapists. And it’s not always humans who pay.

The Trump administration wanted to deport a Mexican criminal alien named Fidel Lopez in February, but liberal Oregon decided to side with the so-called “Resistance.” Two months later, they arrested Fidel for raping dogs.

The number of sanctuary counties runs into the dozens—in Oregon, alone… and some of their victims pay with their lives.

An illegal criminal from Honduras named Elder Carceres-Coello had a record of crimes and deportations going back to 2005. But sanctuary cities kept giving him another chance.

Washington wanted to stick it to the newly elected Trump, so they ignored his ICE detainer twice in 2017.

That August, they arrested Elder one more time… for robbery and murder.

This isn’t an isolated event, either.

Cops in another Washington town picked up Rosalio Ramos-Ramos in October 2017, who had already been deported four times. The city’s leftist politicians refused to hand him over to ICE.

Three months later, they arrested him for murdering and dismembering his latest victim.

He’s proof that, even when ICE can finally send criminal aliens back to their own country, the Democrats always let them worm their way back into US cities.

Where Trump wants the Wall to have a “big, beautiful door,” Pelosi would install a revolving door.

The Left knows the gang members and killers will be back as long as the border remains wide open. “Out of the 188,382 criminal aliens deported in 2011, at least 86,699, or 46 percent, had been deported earlier and had illegally returned to the United States,” according to the Center for Immigration Studies.

The latest caravans working their way to the border had 1,520 illegals who had already been deported—including about 30 sex offenders.

“When local law enforcement decides to uphold sanctuary policies and release illegal criminal aliens without notifying ICE, it is a decision to protect and release criminals who are preying on victims in our communities,” said Bryan Wilcox, an ICE official in leftist Seattle. The left-wing’s open borders, sanctuary city ideology “places everyone in potential danger.”

These repeat offenders break our immigration laws, hurt our children and senior citizens…even our pets!

Then, instead of handing them over in cuffs to immigration agents at the prison door, sanctuary cities force the Trump administration to track down these people and arrest them in their homes — where illegals could panic, and their neighbors could get caught in the crossfire.

Even though these are re-offenders guilty of the worst crimes, the Left ran around with its hair on fire this weekend after Trump announced a new immigration enforcement effort.

The people that Ice will apprehend have already been ordered to be deported. This means that they have run from the law and run from the courts. These are people that are supposed to go back to their home country. They broke the law by coming into the country, & now by staying.

Nancy Pelosi attacked Trump for the “heartless raids” that were “brutal” to illegals.

She got excited that “fully half of those swept up in the ICE raids have no criminal record” — besides entering the country illegally, of course.

The ICE list proves many of these illegals will break other US laws soon… but Pelosi and her ilk side with the illegals.

After another set of sweeps last year, Pelosi promised House Democrats “will continue to oppose these cowardly attacks, and we will remain open to the patriotic immigrants who are the constant reinvigoration of America.”

But the illegals that Pelosi and Schumer, Biden and Bernie and the rest of the 2020 Democratic hopefuls want to protect aren’t reinvigorating Americans—they’re decapitating, raping and assaulting us.

It’s time to pour some ICE on the liberals’ love affair with criminal aliens.