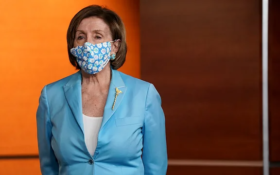 Pelosi husband, stock trader Paul Pelosi, was assaulted so badly that he was hospitalized by the intruder.

The attacker is in the custody of the police.

The Congresswoman was not home at the time of the break-in. Paul Pelosi is expected to make a full recovery.

“Early this morning, an assailant broke into the Pelosi residence in San Francisco and violently assaulted Mr. Pelosi,” Pelosi’s office said. “The assailant is in custody and the motivation for the attack is under investigation.”

“Mr. Pelosi was taken to the hospital, where he is receiving excellent medical care and is expected to make a full recovery. The Speaker was not in San Francisco at the time.”

“The Speaker and her family are grateful to the first responders and medical professionals involved, and request privacy at this time.”

The statement didn’t provide further information on the suspects identity or what injuries Pelosi’s husband sustained.

Pelosi’s San Francisco home was previously the target of vandals in January of 2021 after Congress, at the time, passed a $600 stimulus check instead of the $2,000 payment demanded from Democrats.

The phrases “$2K,” “Cancel Rent!” and “We Want Everything!” were spray painted on her garage door. A pig’s head and fake blood were left in her driveway.