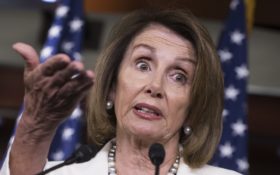 Nancy Pelosi and multiple Democratic presidential hopefuls are making a new pitch that they’re the party that cares most about Christian values.

As part of the new push to trick religious voters, the House Speaker auditioned for a new career earlier this month: She wants to be a faith healer…

At a national press conference, Pelosi said that getting the government to socialize healthcare was like being touched by the hand of Jesus.

The aging Speaker seemed to need a little healing herself, as she stammered and repeated little words and phrases like “Rain Man.”

Pelosi thinks Bernie Sanders’ socialist Medicare for All program, which would abolish all private insurance, is no different than Jesus cleansing the heathens.

Pelosi threw her support behind the socialist proposal, because she said Democrats “want that power to cure to be available to everyone, services for everyone,” she repeated again.

Out of nowhere, the Pelosi added, “We need more funding for Alzheimer’s, for sure.”

But whoever wrote the words that the 79-year-old stumbled through is following the Democrats’ latest cynical plot to try to win Christian votes by talking about faith 24/7.

Democrats are totally open about the fact that they’re trying to use God to win votes.

Guy Cecil, the former Baptist minister who heads up the pro-Hillary super PAC Priorities USA, said Democrats are targeting “Trump, who is entirely paradoxical to Christianity, and that opens up some voters to new candidates.”

Cecil, who worked in Hillary’s campaign office with Bill Clinton, thinks Trump spends too much time breaking the Ten Commandments. And he thinks Christians will vote for Democrats if they just at least sound like they go to church.

Barack Obama did that when he ran for president, giving speeches that sounded like he came straight from a pulpit…but then he got into office and started saying “America is one of the largest Muslim countries in the world.”

Still, Democrats think Christians are stupid enough to fall for the act one more time.

2020 Democrats know they’re running against one of the most popular Republican presidents in decades. They need all the votes they can get, so they’re getting down on their knees, dusting off their Bibles, and sprinkling last-minute references to God in their speeches.

Senator Kristen Gillibrand, D-N.Y., one of the dozens of Democrats running for president this year, gave an eight-minute sermonette at Mt. Carmel Baptist Church in Waterloo, Iowa—where she said putting on the “armor of God” means defending abortion and turning America socialist.

Sen. Cory Booker, D-N.J. said that when Republicans and conservatives speak about God, they are “not humble” and “are more judgmental.” (That sounds pretty judgmental to us!)

Kamala Harris, D-Calif. now drones on about how she used to sing in her church choir when she was a little girl.

But when they talk to each other, they’re open that this is all about winning blue collar Democrats who voted for Trump in 2016.

Gillibrand said the Democratic Party plans a “reclamation” of religious voters—like Christians’ votes ever belonged to the Democrats in the first place!

Christians and other religious voters have left the Democratic Party like a battered wife fleeing an abusive spouse.

At one time, the Democrats gave a home to believers—but somewhere along the line they decided to make Christians their whipping boy.

They want to force Americans to fund abortion up until the moment of birth.

They put Christian bakers and florists out of business.

They want to crush nuns and priests beneath gigantic fines for not backing Obamacare—and now they want us to believe that they are the party of God bringing Jesus’ healing back to everybody.

Jesus opened the eyes of the blind, and we see right through you.