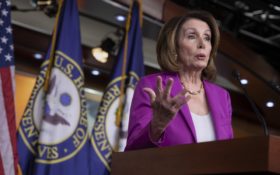 Nancy Pelosi may be the first female Speaker of the House, but she just backed a bill that would let men cheat women out of scholarships.

Pelosi led her party into voting for a bill that will abolish women’s sports in all but name only.

The so-called “Equality Act” would force girls in sports to compete against men who “identify” as women.

Part of that bill, Title IX, guarantees that women have equal funding for high school and college sports. But under the Equality Act, if a man decides he wants to compete in women’s sports, the women have to let him.

Women say that gives boys an unfair advantage—and nationwide, a string of boys and men posing as females have defeated biological women at their own sports.

Yearwood won a state title in 2017 as a freshman…but a year earlier, Yearwood competed on the boys’ team. Yearwood’s winning time against the girls would have placed dead last against other biological boys.

Girls who lose out on titles—and scholarships—are crying foul.

“We all know the outcome of the race before it even starts,” said Selina Soule, a biological girl who just missed running in the New England regional championships because of two transgender competitors. “It’s demoralizing.”

Boys who couldn’t win against other boys have been whipping female opposition in a variety of sports.

Mixed Martial Arts fighter Fallon Fox, who was born a man, broke a female boxer’s eye socket and gave her a concussion during a fight in 2014.

This unfair competition has women speaking out for their sports—and their safety.

A few politicians have listened to them. Donald Trump Jr. tweeted, “I feel so sorry for the young ladies who trained their whole lives to be the best in their state and to hopefully attain scholarships.”

The Equality Act “would do much more harm than good, and women and children would bear the brunt of the damage” said Rep. Doug Collins (R-GA).

Girls in sports already start out behind boys. Women only make up 41 percent of all athletes to begin with.

So, some of the boys have found a short cut: Compete against girls instead.

These civil rights laws are supposed to give women more power and opportunity, but the “Equality Act” guarantees they’re losers before the game even begins.

Pulling the rug out from under female athletics was so important to Pelosi and the Democrats that they made it one of the first bills they introduced after she took the Speaker’s gavel.

Then on May 17, Nancy Pelosi led every single Democrat in the House in backing the bill.

Remember all those women standing up and applauding each other at the State of the Union Address? They were all in.

So were eight Republicans who voted with them: Reps. Susan Brooks of Indiana, Mario Diaz-Balart of Florida, Brian Fitzpatrick of Pennsylvania, Will Hurd of Texas, John Katko of New York, Tom Reed of New York, Elise Stefanik of New York, and Greg Walden of Oregon.

It’s 2019, but women still have an unfair and uphill battle.

Liberals shouldn’t be finding new ways to keep women down.