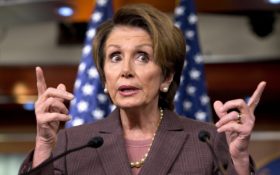 House Speaker Nancy Pelosi told the mainstream media this week that the United States is facing a “constitutional crisis.”

Just days later, she was having a private meeting with MSBNC host Al Sharpton to get an outline on what policies the network wanted pushed.

Sharpton hosts “Politics Nation” on MSNBC during the weekends, and also chairs the National Action Network.

He tweeted a picture Wednesday showing that as an activist and television news host, he was able to outline policy to Pelosi.

Meeting with Madam @SpeakerPelosi in her office. I am briefing her on NAN’s priorities coming out of our convention. pic.twitter.com/ANwR1MWnFa

It’s more evidence that MSNBC and the mainstream media are so interconnected with Democrats, critics are calling it a “state run” propaganda network straight from the Soviet Union playbook.

Imagine if Sean Hannity had tweeted a picture of him, talking down to Trump, that claimed he was “briefing him” about the priorities he needs to be concerned over.

The liberal media would lose their minds!

But here we have one of MSNBC’s top stars doing that to the leader of the Democratic Party in the House, and not a peep?

MSNBC host advising the Speaker of the House on policy.

Are the same reporters who criticize Hannity's relationship with Trump going to speak out about this? https://t.co/CDpoOK19dU

“Sean Hannity’s relationship with President Trump has been under constant fire for both its closeness and for the blurring of the lines between media and the administration,” Mediaite pointed out. “The question raised most often with respect to Hannity is whether he acts as a propaganda outlet for the President.”

“The question raised today was whether MSNBC, through Sharpton, should be subject to the same criticism.”

As if we needed further proof the media can’t be trusted… here it is.