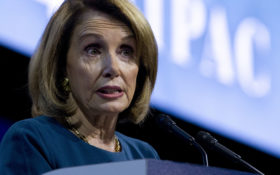 If recent polling trends hold true, Nancy Pelosi, D-Calif., will soon be fired from her position as Speaker of the House.

But Pelosi could only “scoff” at the idea that voters would choose Republican Party candidates over her hand-picked Democratic Party nominees.

In an interview with The New York Times on Monday, the paper presented “troubling” data to Pelosi that a 2022 Republican sweep may be coming in the midterm elections.

But Pelosi “rejected the suggestion that late-breaking trends” were good for Republicans, and suggested that abortion concerns would motivate voters to save Democrats.

“Part of it is, I cannot believe anybody would vote for these people,” she scoffed, and then “disputed the idea that abortion was fading as a driving issue.”

“You think that. You go think that,” Pelosi reportedly said. “I can tell you, it is not in the rearview mirror.”

Democrats have held both chambers of Congress and the presidency for the last two years, but they may not have such consolidated power for much longer.

Bolstered by frustration over the economy, inflation, and Biden’s leadership, voters are expected to give Republicans big wins in the next few weeks.

While control of the Senate in uncertain, Republicans would take back the House if they net just five seats in dozens of competitive districts, and they are trying to win dozens.

If Republicans win the House on Nov. 8, the GOP caucus will elect a new speaker, take power on Jan. 3, 2023, and promptly fire Pelosi. They will run every committee and decide what bills come to the House floor.

With a Republican victory, most, if not all, of President Joe Biden’s agenda would be effectively dead for the final two years of his term.

Still, nothing becomes law without Biden’s signature. Bills to fund the government, raise the debt ceiling and deal with military issues are necessary for government to function. Those bills are likely to become flashpoints in negotiations between the GOP, Democrats and the White House.