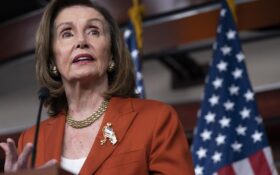 House Speaker Nancy Pelosi, D-Calif., is likely to retire after the 2022 midterms as the Democratic Party’s third most powerful politician. She will run for re-election for Congress in her district, but has repeatedly vowed not to resign her role as the speaker (or minority leader).

Her replacement has reportedly been groomed by Pelosi since 2018 — and he’s a name especially familiar to the supporters of former President Donald Trump.

Rep. Adam Schiff, D-Calif., isn’t just the leader of Trump’s impeachment trial and the Democrat-led House investigations into the former president. Schiff is also reportedly ready to take on the role of the House of Representatives top Democrats, according to a report by The Washington Post.

Schiff “is gauging members’ interest and planting the seed that leading the caucus is his goal” with fellow top Democratic Party leaders, eight lawmakers and over a dozen Democratic insiders told the Post.

Schiff’s candidacy has been buoyed by his fundraising prowess.

“He has hired political fundraiser Bruce Kieloch, whom Pelosi uses for the House Majority PAC,” according to the Post’s report. “He has $19 million cash on hand in his personal campaign account and his leadership PAC has raised $7 million this year for candidates and the DCCC, according to FEC filings.”

He has reportedly “focused on consolidating support among his home base” in California,  but “has not made an explicit ask for endorsements” yet.

But insiders say it would be too early to roll out the red carpet and anoint Schiff as Democratic Party’s top House leader. Far-left progressives and some moderates have had a “tepid” response to Schiff’s outreach.

Some in the Democrat caucus are opposed to Schiff, not because he pushed the Russia hoax, but because he does not fit the intersectional qualities the Democrat party fancies, according to the Post. Intersection opposition to Schiff reportedly includes Reps. James Clyburn (D-SC) and Hakeem Jeffries (D-NY), who have allied themselves closely with Pelosi’s reign as speaker. Rep. Steny Hoyer (D-MD) would also reportedly be interested in the top job, but he is not of intersection quality.