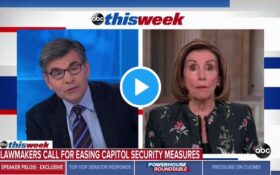 House Speaker Nancy Pelosi is suddenly interested in asking questions about the results of the 2020 general election — and she’s asking for an investigation.

Pelosi isn’t doubting President Joe Biden’s win, however. She only wants to overturn one result: A narrow GOP win in Iowa’s second district.

That’s what she told ABC News’ George Stephanopoulos on Sunday.

The election of Rep. Mariannette Miller-Meeks “won a razor-close election, just six votes. The votes were counter, recounted, and certified by the state,” Stephanopoulos pointed out. “The House administration committee began a process this week that could lead to unseating [a] congresswoman.”

“That has Republicans accusing you of hypocrisy, including Rep. Jim Jordan” Stephanopoulos replied. “He put out this tweet: ‘Speaker Pelosi says she’s open to unseating Republican Congresswoman Miller-Meeks. Translation: You’re only allowed to object to an election if you’re a Democrat.'”

“Why investigate an election that was certified by the state?”

“Well, it was six votes,” Pelosi replied. “Six votes, and our candidate … asked for this process to begin. What the committee did — the House Appropriation Committee — was very narrow. To take the process to the next step, and see where it goes from there. An election of six votes after 400,000 total votes cast.”

“This is not unique. This has happened … before, when races have been close on one side or the other,” she claimed. “So let’s take it to the House. Even [late Supreme Court Justice Antonin Scalia] agreed that the House has the authority to seat members, and therefore we can count the votes. Six votes, out of 400,000.”

.@GStephanopoulos asks @SpeakerPelosi why she's trying to steal an election where the votes were "counted, recounted, and certified by the state."

Pelosi says it is ok to overturn the results because the Republican candidate only won by 6 votes.

What a hypocrite. #IA02 pic.twitter.com/IDdDXl0S49