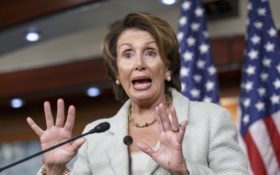 Since the fall of failed Democratic nominee Hillary Clinton, the Democratic Party has been in complete turmoil.

But there’s one woman in particular whom the party and voters have turned against — and it could mark the beginning of the end of her political career.

House Minority Leader Nancy Pelosi has been criticized as out-of-touch and part of the establishment, two qualities that could lead to her fall from power in 2018.

She is currently challenged by Bernie Sanders supporter Stephen Jaffe in San Francisco in the next congressional primary.

It’s a face-off that represents the internal conflict within the Democratic Party, fueled by anti-establishment beliefs that helped Sanders’ primary campaign against Clinton in 2016.

Sanders supporters believed Clinton and the Democratic National Committee rigged the primary against them — and they’ve been plotting their revenge ever since.

And Sanders’ supporters aren’t the only liberals rooting against Pelosi.

She caused outrage among the left Sunday after she mistakenly referred to President Donald Trump as “President Bush” and then said, “I’m so sorry, President Bush. I never thought I’d pray for the day that you were president again.”

She then praised the Bush administration, explaining how well the establishment Democrats worked with Bush when he was in office.

.@NancyPelosi to @jonkarl: "I never thought I'd pray for the day" when George W. Bush was president again https://t.co/mc5NSfxbZx #ThisWeek pic.twitter.com/BgMHuRwg5k

And leftists everywhere lost it.

Tweets came flying at Pelosi, accusing her of sympathizing with Bush, who many labeled as a “war criminal.”

Some Twitter users mentioned her upcoming re-election, showing excitement about the fact that she faces an opponent.

So, #NancyPelosi is praying for a war criminal to be President again. Glad there is a primary challenger in her future. https://t.co/GSta8zliOI

Pelosi is clearly out-of-touch with her voters, and ignorant to the fact that they are not fans of former president Bush.

It’s not just Pelosi, of course. Over two-thirds of Americans think all Democrats are out-of-touch, according to a recent Washington Post poll.

But what’s most notable about the poll is nearly half of Democrats surveyed said their own party was hopeless — a glimpse of the future, perhaps?

“The Democratic Party is viewed as far more out of touch by Democrats than Trump or the GOP are by Republicans,” The Post recognizes.

Could Pelosi be the first causality in the slowly erupting Democratic civil war?

So far, it doesn’t look good for her.