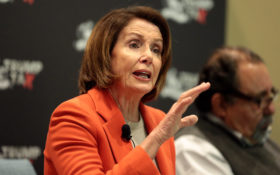 It turns out that the person that lost the most on Wednesday night wasn’t any of the 2020 presidential hopefuls who took the debate stage on MSNBC.

And he predicted the political stunt would backfire on Pelosi.

At the hearing, Democrats are likely to grill Mueller on whatever questions they think still remain surrounding the report.

“If he stays within the four corners of the document, what good is his testimony? If he goes outside the document, he’s going to get killed politically, because then he becomes a political commentator,” Graham said. “If he does what he said he would do in his press conference, refer back to the document, this is just a political circus.”

He said forcing Mueller to sit in a chair before Democrats is just a stunt. It’s not about finding the “truth” — it’s about fulfilling liberal voters impeachment fantasies.

That’s bad news for Pelosi, who has repeatedly said she wants nothing to do with impeachment.

“The biggest loser of Mueller coming into the House, I think, is Nancy Pelosi,” Graham said. “It is going to be harder for her to control her troops after Mueller testifies.”

After all, the liberal MSNBC moderators couldn’t keep their hands off the question of impeachment during the debate.

Former congressman Beto O’Rourke declared Wednesday night that the only way to “save” America is by starting impeachment proceedings.

So Graham’s point was that many Democratic hopefuls vying for the presidency are promising their voters impeachment — which means whether Pelosi likes it or not, her voice is quickly becoming a lost cause.

Graham said President Donald Trump has been demanding an end to the two-year Mueller circus — and Trump will soon get his wish.

“The president asked a really good question. ‘When does this end?’ Mr. President, this ends with your re-election,” Graham said.

“Once you win in 2020, this ends. But between now and then, they are going to do everything they can to undermine your presidency. They are going to retry the Mueller case.”