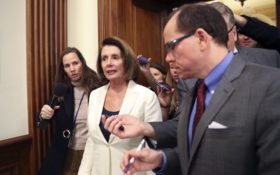 House Minority Leader Nancy Pelosi staged a record-breaking, eight-hour speech to try and pressure Republicans to allow a vote on protecting “Dreamer” immigrants — and to demonstrate to increasingly angry progressives and Democratic activists that she has done all she could.

Wearing four-inch heels and forgoing any breaks, Pelosi, 77, spent much of the rare talkathon Wednesday reading personal letters from the young immigrants whose temporary protection from deportation is set to expire next month. The California Democrat quoted from the Bible and Pope Francis, as Democrats took turns sitting behind her in support. The Office of the House Historian said it was the longest continuous speech in the chamber on record.

This woman broke a record for the longest continuous speech, and for what? She wanted to thanks these illegal immigrants for breaking the law by coming in the country undocumented.

During President Donald Trump’s State of the Union address, not once did Pelosi stand to give Trump the respect he deserves as our president. Yet, she can stand for eight long hours for illegal immigrants. 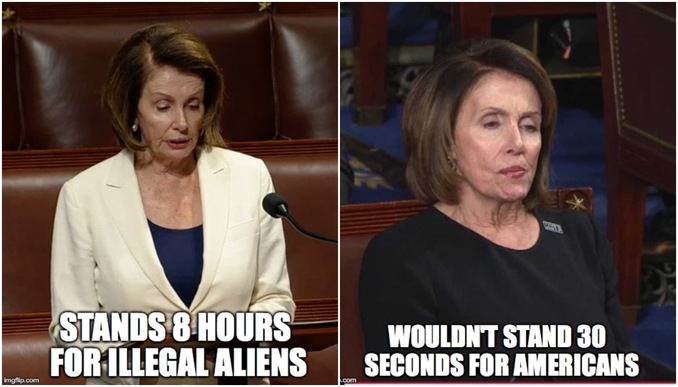 “You see, these people are being deported,” Pelosi said around hour six. “We can do something today to at least make whole the children.”

Her remarks seemed partly aimed at the liberal wing of Pelosi’s own party, who seethed as Senate Democrats cut a budget deal with Republicans that could quickly steal the momentum behind the effort to resolve the Dreamers’ plight.

The wide-ranging budget accord says nothing about renewing the Obama-era Deferred Action for Childhood Arrivals program, called DACA, which temporarily shields Dreamers — hundreds of thousands of immigrants brought to the country as children and living here illegally — from deportation. President Donald Trump has moved to annul DACA.

Pelosi said she’d oppose the budget deal unless GOP leaders agreed to hold a House vote on helping the Dreamers. But top Democrats said they weren’t corralling rank-and-file lawmakers to oppose the budget pact, leading some of the party’s immigration advocates to question the forcefulness of her opposition.

“I’m going to take everything she says at face value,” said Rep. Luis Gutierrez, D-Ill. “And then hopefully tomorrow she will validate that trust by stopping us from voting for it. If she doesn’t, then it was a nice speech.”

Pelosi’s dramatic performance had no immediate impact on Republican leaders, who have not scheduled a vote on the issue. AshLee Strong, spokeswoman for House Speaker Paul Ryan, R-Wis., said Ryan “has already repeatedly stated we intend to do a DACA and immigration reform bill — one that the president supports.”

While Pelosi spoke, immigration activists rallied in Washington and threatened retribution against the congressional Democrats who abandoned the strategy of demanding that a budget accord be paired with an immigration deal. The fresh threats exposed deepening divisions within a Democratic Party struggling to address a liberal priority in Republican-controlled Washington.

“I’m not a loyal Democrat,” Linda Sarsour, a political activist who co-chaired the 2017 Women’s March, declared during a fiery rally near Capitol Hill. “We will be joining primaries this year and we will primary Democrats who did not have the spine or the courage to stand up for our undocumented family.”

The activists who filled a Washington church Wednesday, like liberal leaders nationwide, called out Pelosi and Senate Minority Leader Chuck Schumer for failing to attach immigration legislation to a must-pass bill like the budget deal.

“What are they thinking? They’re giving up their leverage,” said a frustrated Angel Padilla, policy director for the liberal group Indivisible.

Pelosi started speaking around 10 a.m. and yielded the floor at 6:11 p.m. By the end, there was a quiver in her voice, a stumble over some words and a case of sniffles.

At one point she interrupted herself to read a note from the House historian alerting her that she had delivered the chamber’s longest continuous speech, besting Rep. Champ Clark’s five-hour, 15-minute stem-winder about tariff reform in 1909. In the Senate, where unthinkably long orations are more common, South Carolina Sen. Strom Thurmond spoke against the Civil Rights Act of 1957 for a record 24 hours and 18 minutes.

When Pelosi finished, around 50 Democrats responded with a standing ovation, high-fives, hugs and kisses. The Republican side of the chamber was virtually empty.

“We achieved the recognition of what the Dreamers mean to America,” she told reporters afterward. “They are a reflection of all the immigrants that have come before.”

The federal government will shutter nonessential operations Thursday at midnight unless Congress passes a spending plan.

It’s unclear whether the liberal outrage will sink the two-year, nearly $400 budget deal unveiled Wednesday that would provide Pentagon and domestic programs with huge spending increases. Schumer, D-N.Y., praised the agreement for providing needed funding for health, drug abuse and social service programs, having dropped his push to use the budget talks to extract concessions on immigration.

Rep. Nanette Barragan, D-Calif., a member of the Congressional Hispanic Caucus, said the Latino community thinks Senate Democratic leadership “has turned their back on them.”

Hispanic caucus members and other Democrats made clear to Pelosi earlier Wednesday that “we would not support a budget caps deal unless we had some clarity about what would happen to Dreamers,” said Rep. Ruben Gallego, D-Ariz. They insisted, he added, on DACA language in the budget deal or some guarantee the issue would be addressed.

Yet numerous House Democrats said they weren’t being pushed by Pelosi’s leadership team to oppose the Senate deal without a DACA fix, and some of Pelosi’s top lieutenants said no such effort was underway. Asked if she was “whipping” Democrats to oppose the budget measure, Pelosi told reporters, “I’ve just been on the floor all day.”

The lack of a unified Democratic strategy infuriated liberal leaders.

“This is a moral fight that Democratic leadership is failing on. That’s something that’s going to have long-term implications,” said Murshed Zaheed, political director for the progressive group CREDO.

Should Pelosi fail to unify House Democrats against the deal, he added, “it’s going to be another strike against her effectiveness as leader of the caucus.”

“There will be a reckoning,” said Ben Wikler, Washington director for the liberal group MoveOn.