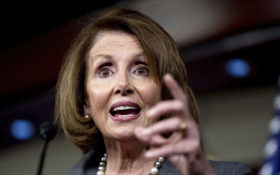 Identity politics is the last weapon the Democratic Party has left – and a hot mic just caught Nancy Pelosi, the Minority Leader of the House of Representatives, giving away the playbook!

“Greetings from the great state of Indiana!”

For Pelosi, that won’t do – she is overheard quickly barking orders to Carson.

You can watch the shameful exchange for yourself here —

Critics claim this is video proof of what conservatives have been saying for a long time — liberals aren’t interested in arguing the issues to voters, they’re only interested in feelings.

Carson says just seven words before Democratic leadership begins ordering him to stick to that plan.