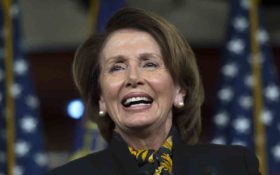 The left claims it’s a myth. They call it a conspiracy theory. They say it’s just plain “right-wing paranoia.”

When the topic of open borders come up, liberals dance around the issue like Fred and Ginger. Some even look right into the camera and claim – with a straight face – that they want secure borders, too.

And it’s not a myth, a distortion or paranoia after all.

They really DO want open borders!

President Donald Trump this week signed an executive order reversing a policy caused by years of neglect from both parties in Congress, who have repeatedly failed to pass a comprehensive immigration reform law.

His order ends the separation of children from families caught illegally crossing – a policy put in place to keep kids out of jail, which is where adults detained at the border are sent.

“The President’s Executive Order seeks to replace one form of child abuse with another. Instead of protecting traumatized children, the President has directed his Attorney General to pave the way for the long-term incarceration of families in prison-like conditions,” she said in a news release.

Others on the left offered a similar complaint.

“This Executive Order doesn’t fix the crisis,” Sen. Kamala Harris, also a California Democrat, wrote on Twitter. “Indefinitely detaining children with their families in camps is inhumane and will not make us safe.”

The ACLU was even more direct.

“This executive order would replace one crisis for another,” the organization said in a statement from executive director Anthony D. Romero. “Children don’t belong in jail at all, even with their parents, under any set of circumstances.”

In other words… you CAN’T send adults to jail and kids to special facilities for juveniles, but you also CAN’T detain entire families together in specialized facilities for that purpose, either.

So what CAN you do?

Trump sure sees right through it, and immediately fired back.

“Democrats want open Borders, where anyone can come into our Country, and stay,” he wrote. “This is Nancy Pelosi’s dream. It won’t happen!”

Other Republican leaders also called out the left for moving the goalposts and actively working to undermine border security.

“I’m beginning to think that the Democrats who make this alternative argument are less interested in keeping families intact and more interested in having open borders,” House Speaker Paul Ryan, a Republican from Wisconsin, said at a news conference.  “And the last thing we want to do is have an incentive for illegal immigration and open borders.”

He said that while we want to keep families intact, we also need to secure the border and stop drugs.

That’s a part of the conversation the left doesn’t want to address.

Many of the people illegally crossing aren’t necessarily the “bad hombres” Trump warned about, but they are often forced to work for them. Drug cartels intercept migrants on their way to the border and turn them into drug mules.

“They hit us, threw us on the ground, searched us and took our money,” a migrant named Rodolfo told NPR in 2011. “Then they told us if we didn’t smuggle drugs for them, they would kill us. They didn’t give us any other option.”

Those drugs – whether they’re carried by migrants forced into it, or the “bad hombres” themselves sneaking back and forth over the unprotected border – now make up a $64-billion-a-year industry, according to the Treasury Department.

The left claims they want to end the opioid crisis and protect Americans from the ravages of drug addiction.

But clearly, open borders will do just the opposite, making it easier for more drugs to enter the country, and leading to more addicts and more deaths among innocent Americans.

Thank the Democrats for that!

MUST SEE: Nancy Pelosi has mental breakdown when asked one simple question