Nancy Pelosi caught in secret recording scandal (vote her out!) - The Horn News 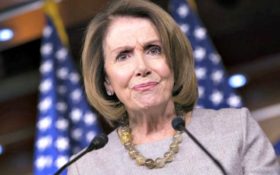 House Minority Leader Nancy Pelosi is in deep trouble after establishment Democrats were caught on a secret audio recording pushing around far-left progressives.

As the Democrat leader for the past seventeen years, Pelosi has faced increased pressure from party insiders after overseeing the disastrous 2016 presidential election.

Now she’s embroiled in a scandal involving establishment Democrat Steny Hoyer and radical progressives… and it has leftists calling for a change in party leadership.

In a secret recording from December and released by The Intercept on Thursday, Hoyer is heard pressuring far-left Congressional candidate Levi Tillemann in Colorado’s 6th district, to drop out.

“They are pumping money for its candidates who are going to fight for corporations and Wall Street and the establishment,” Tillemann said.

Pelosi rushed to Hoyer’s defense. “Some candidates can do better in the general than others. That’s a clear-eyed conversation that we should be having,” she said.

The move has caused backlash among far-left idealists in the party.

“We saw what happens when Democratic Party leaders put their fingers on the scale in primaries in 2006 through 2016, when we lost nearly 1,000 elected offices up and down the ballot,” said Charles Chamberlain, executive director of Democracy for America.

Pelosi has been under heavy fire for months for her ineffectual leadership of the Democratic party.

Could this be the straw the breaks the camel’s back?

Should Nancy Pelosi be voted out as Democratic leader?