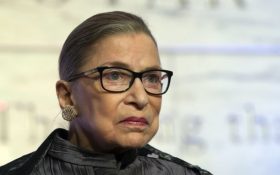 Where is Justice Ruth Bader Ginsburg?

It has been 55 days since the ailing Supreme Court justice has been seen in public. The 85-year-old liberal judge has started cancelling her scheduled public appearances in February.

Is she really on the road to recovery — or is her health worse than anyone previously believed?

There’s speculation that House Speaker Nancy Pelosi may be trying to hide just how poor Ginsburg’s health has become.

That’s according to The American Thinker, which noted that Pelosi’s intentional delaying of the President Donald Trump’s upcoming State of the Union address may not have been about the government shutdown.

It could be that Ginsburg’s health would not let her attend — and her absence would cause a flurry of questions on whether she’s well enough to continue her job on the supreme court.

Across the political aisle, everyone has sent the ailing judge their prayers and best wishes. But if her failing health means Ginsburg can no longer serve in her duties, there would be increased pressure for her to step aside and retire.

That would give the Trump administration an incredible third Supreme Court nomination in just three years — and lock-up a solidly conservative high court for generations.

It’s an idea that’s unthinkable to Pelosi and liberal lawmakers.

“Could this be why Nancy Pelosi is so defiantly postponing the president’s State of the Union address – because it might reveal to the world an empty seat where RBG is supposed to be?” The American Thinker asked on Tuesday.

“Although the justice didn’t attend, in protest, President Trump’s first State of the Union in 2018 and Supreme Court justice attendance is by no means required, it would be terrible optics as the nation wonders where and how she is,” the magazine continued.

Ginsburg’s health has been enough of a worry that the White House spent January quietly drafting a list of possible replacements.

The American people will know the truth soon enough; Democrats ran out of time to stall earlier this week.

Pelosi finally agreed on Monday to host the State of the Union on Tuesday, Feb. 5th.

When the cameras show Trump taking the podium, court watchers will keep their eyes peeled on Ginsburg’s seat in the House chambers.

If it’s empty again, expect a flurry of pressure that she officially retire.

Then, hold on to your hats. The media circus around Justice Brett Kavanaugh’s nomination was bad.