Nancy Pelosi just got VERY bad news (she was humiliated!) - The Horn News 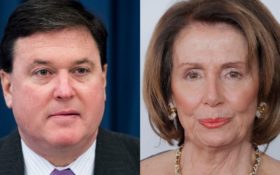 A Republican lawmaker has just sent House Minority Leader Nancy Pelosi a message that she is sure to hate — and one that could threaten her hold on the Democratic Party.

Indiana Rep. Todd Rokita, a Republican, has unveiled a new piece of legislation that will make the bonuses given out as a result of Trump’s tax reform tax-free.

The brilliant name for the legislation was targeted straight at Pelosi: It is being called “CRUMBS”, a clear reference to Pelosi’s dismissal of the thousand dollar bonuses as little more than “crumbs” for working Americans.

The bill has been dubbed “Creating Relief and Useful Middle-Class Benefits and Savings,” also known as “CRUMBS.”

“Americans are receiving thousands of dollars in bonuses and more money in their paychecks thanks to President Trump’s tax reform, but out-of-touch Democratic leaders believe they only amount to crumbs,” Rokita said in a statement. “The CRUMBS Act will let Americans keep more of the money they receive as a result of President Trump’s tax reform, and allow them, not the government, to choose how best to spend their bonuses.”

A total of 346 companies have given out bonuses or raises as a result of the tax reform so far, so the bill is sure to be popular with American voters.

With this new bill, thousands of workers would be eligible to receive their full bonuses amount.

Opposing a popular bill would be bad news for Pelosi, who is suffering from near record-low polling numbers —

On non-presidential favorability, only Pence is right-side up (+4), with all major Congressional leaders polling underwater. Ryan's in the least-bad shape of the Big Four, with Nancy Pelosi dead last #PoliticoPoll pic.twitter.com/4AYz0mVNLa