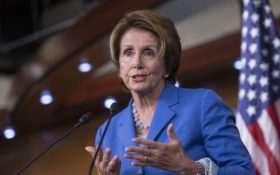 House Minority Speaker Nancy Pelosi will do anything to maintain power after the election — including bribery.

That’s according to 3rd Massachusetts congressional district candidate Rick Green, who said Pelosi’s latest “stunt” in his district was nothing more than a bribe for his opponent, Lori Trahan. He accused Pelosi and Trahan of exchanging fundraising cash in return for support after the midterm.

“It doesn’t take a rocket scientist to figure out Nancy Pelosi is coming here to buy Lori’s vote,” Green said, referring to an expensive fundraising gala Pelosi held Tuesday. “My vote is not for sale.”

Pelosi appeared as the guest speaker at a Trahan fundraising gala in Concord, Massachusetts, where guests were recommended to contribute as much as $2,700 per person to Trahan’s campaign.

Green pointed out that means “average voters weren’t invited” to attend — only the rich.

Trahan’s campaign has denied that she’s committed to vote for Pelosi to lead the Democratic Party after the 2018 midterm election.

The press was banned from entering the fundraising event.

Democratic insiders told The Boston Herald that Trahan’s willingness to connect herself to the “politically toxic” Pelosi was a smart trade-off for a handsome reward.

A liberal-heavy district, Trahan is expected to win the election against Green by a large margin.

“Lori is going to win — and the Democrats have a very strong chance of taking the House back. So being with [Pelosi], committing to voting for her, I think it’s a smart play for a freshman member of Congress,” Democratic consultant Scott Ferson told The Herald.

“You can criticize Nancy Pelosi for a lot, but she is and largely remains in her job because of her fundraising prowess. She is the best at it on the Democratic side,” Ferson said.