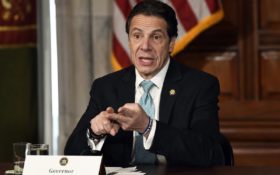 Gov. Andrew Cuomo on Tuesday shrugged off criticism and even calls from Roman Catholic leaders for his excommunication from the church over his support of a new state abortion law.

Saying he is duty-bound to separate his religious views from his work as governor, Cuomo, a Democrat, defended his support for the state’s Reproductive Health Act, which he signed last week. The bill mostly codifies abortion rights protected in Roe v. Wade and other federal abortion rulings.

Catholic bishops in Knoxville, Tennessee, and Tyler, Texas, tweeted support for excommunicating Cuomo from the church after he signed the abortion bill last week.

“Excommunication is to be not a punishment but to bring the person back into the Church. It’s like medicine for them,” tweeted Knoxville Bishop Rick Stika. “But this vote is so hideous and vile that it warrants the act.”

A spokesman for New York Cardinal Timothy Dolan rejected those calls in a statement, saying excommunication “should not be used as a weapon” against politicians who support abortion rights. But Dolan himself blasted Cuomo in an op-ed published Tuesday in The New York Post.

The piece called the abortion bill “ghoulish” but focused instead on Cuomo’s comments about another piece of legislation, known as the Child Victims Act, that would extend the statute of limitations to give abuse victims more time to sue or seek criminal charges. In his State of the State address, Cuomo included a quote from Pope Francis that “the church cannot remain indifferent to this, and the church must punish such priests.”

That displeased Dolan, who wrote that Cuomo was using the Pope’s comments out of context as “an applause line.” He said the governor “insults and caricatures the church” and tries to “reduce the sexual abuse of minors … to a ‘Catholic problem.’”

The church had been a leading opponent to the bill until it dropped its opposition last week when the legislation was revised to treat public and private schools the same. The bill passed nearly unanimously Monday.