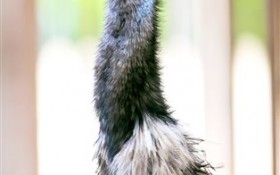 We’re glad that’s over. An emu famous for running wild through New Hampshire for more than a week has finally been reunited with its owner and returned home safely to Vermont… in the back of a Toyota Prius.

The Concord Monitor reports (http://bit.ly/1LX460C ) Kermit Blackwood figured it was a long shot that the emu loose in New Hampshire was his bird, Beatrice. It wasn’t until the Townshend, Vermont, resident traveled roughly 80 miles to the Henniker-based nonprofit Wings of the Dawn when he knew for sure.

Maria Colby, manager of the wildlife rehabilitation center, said she knew the emu was Blackwood’s as soon as they were reintroduced Sunday.

The emu moved closer to Blackwood and rolled its neck toward him, possibly recognizing him by the jacket he was wearing, Colby said.

Blackwood says Taft Hill Farm had lost two other emus about a month ago. One died after being attacked by another animal and the other was found in a neighboring town.

Getting Beatrice ready to go home wasn’t easy. Blackwood and a farm worker struggled a bit to put her into the trunk of their Prius, with the back seats folded down for extra space.

The 90-minute ride back to the farm went smoothly, after they removed a sock from the emu’s head, Blackwood said.

“Everything is well,” he said. “Beatrice is home.”