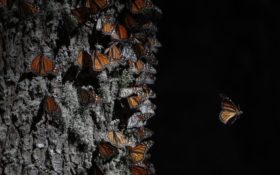 A guide in Mexico’s monarch butterfly preserve has been found apparently slain, officials say, days after a butterfly activist in the same region was found dead in uncertain circumstances.

The Michoacan state prosecutors’ office said the body of guide Raúl Hernández Romero was discovered on Saturday in the municipality of Ocampo. His body showed multiple bruises and a knife-type wound to the head.

Hernández’s family said he has last been seen on Jan. 27 when he left his home in a neighboring municipality, Angangueo.

It wasn’t clear if the case might be related to the death of Homero Gómez González, a prominent defender of the butterflies against illegal logging, whose body was found days earlier in a holding pond in the Ocampo area. Autopsies show he drowned and had a head wound, but officials haven’t determined the circumstances of the death.

The butterflies’ annual migration through Canada and the U.S. to Mexico, threatened by logging, avocado farming, pesticide use, and climate and environmental change, has been a source of income for people in the impoverished mountains of Michoacan state where the insects winter, clumped to oyamel pines.