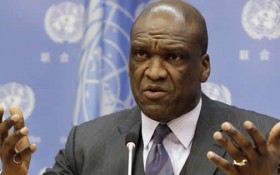 A major bribery scandal was threatening to engulf both Hillary and Bill Clinton — but now the untimely and highly unusual death of a key witness may keep that from happening.

John Ashe, former president of the United Nations General Assembly and former ambassador from Antigua and Barbuda in the Caribbean, was found dead in his home in Dobbs Ferry, New York, last week shortly before he was expected to give testimony in a massive corruption case surrounding a longtime pal of the Clintons. The case is currently in the pre-trial phase.

Ashe was initially reported dead of a heart attack.

Later reports confirmed that his throat was crushed by a barbell in what’s being called an exercise accident.

Ashe was accused of accepting more than $1 million in bribes from several people, including $500,000 from Ng Lap Seng – a shady Chinese billionaire known as “Mr. Wu” who had deep ties to the Clinton Administration and is in jail awaiting trial in the case.

And no doubt, more information about those connections was going to surface in court.

“During the trial, the prosecutors would have linked Ashe to the Clinton bagman Ng,” an unnamed source told The New York Post. “It would have been very embarrassing. His death was conveniently timed.”

Ng’s links to the Clintons goes back decades. In the 1990s, Ng used middlemen to send more than $1 million to the Democratic National Committee and was apparently rewarded with 10 visits to the White House, according to The Daily Beast.

Ng was never charged in connection with the case, although Charlie Trie, the Taiwan-born Little Rock businessman who funneled his donations to the Democrats, later pleaded guilty to violating campaign finance laws.

“Trie’s contributions purchased access for himself and Ng to the highest levels of our government,” a U.S. Senate report on the scandal warned.

All that could have been back in the headlines again during a heated election cycle — if not for the untimely death of John Ashe.

The strange circumstances are already drawing parallels to the unusual 1993 death of Vince Foster, which was ruled a suicide but came amid the investigation of the Whitewater real estate scandal.

Foster had handled the Clintons’ tax returns related to Whitewater.

CNN said the results of an autopsy on Ashe will take approximately 16 weeks — which means they would be ready either just before or just after the election.

However, authorities do not officially suspect foul play.