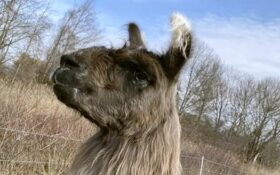 A passerby spotted a wandering llama in a field off an interstate in Massachusetts and with the help of an animal control officer, brought it to a farm for safekeeping.

Patrick Boddy was driving in Newburyport when he spotted the male gray-and-white llama, stopped his truck and approached it on Monday, the Boston Globe reported.

The llama acted “very chill,” as he walked up to him, Boddy told the newspaper.

“I had my arm around the thing, kind of calming him down. It was just really gentle and friendly. I knew it must’ve been some kind of pet or something,” said Boddy.

Eventually, Kayla Provencher, the animal control officer for Newburyport and West Newbury, was alerted and joined Boddy in the field with the llama. They called around to local farms to see if any were missing a llama, the newspaper reported.

“I’m not sure where he came from or how he got there,” Provencher told The Associated Press, but he was hungry and drank a lot of water, indicating he was in need of some care, she said. The state does have records of barn inspections, but she said none of the local farms are missing llamas.

Provencher does not have any leads on the wandering llama’s owner, even after posting photos of him on the animal control’s Facebook page.

For now, the llama is being housed just across the state line in New Hampshire with farm owner Carly LeSage. She owns other livestock but has never had a llama, the newspaper reported.

“I did a night check with him last night and had a glass of wine with him,” LeSage told the newspaper. “I’m kind of a little attached to him at this point.”

If no owner comes forward, LeSage told the newspaper she’s considering keeping the llama herself.