Myanmar BLOCKS human rights lawyers (what are they hiding?) - The Horn News 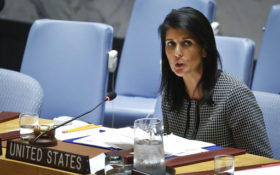 Myanmar’s government says it will instruct its embassies around the world to bar members of a U.N.-approved fact-finding mission from entering the country to investigate alleged human rights violations by security forces against the Muslim Rohingya minority and other groups.

Deputy Foreign Minister Kyaw Tin said Thursday in parliament that the government will not cooperate with the mission, reiterating the position taken by the country’s leader, Aung San Suu Kyi, that its work would be counterproductive.

The U.N. Human Rights Council approved the mission in March in response to international pressure after Myanmar’s army was accused of human right abuses in the course of counterinsurgency operations in Rohingya areas of the country’s western state of Rakhine. Predominantly Buddhist Myanmar denies the Rohingya population many civil rights.