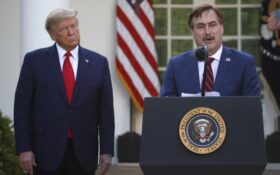 My Pillow CEO Mike Lindell wants to take Ronna McDaniel’s job as the chair of the Republican National Committee.

Lindell accused McDaniel of failing to properly back candidates supported by former President Donald Trump, and he said he would demand procedural changes to ensure election integrity.

“I am 100% running for the RNC chairman against Ronna McDaniel,” Lindell told Steve Bannon, an ally of Trump and an ex-White House strategist.

“I’m all in … and one of the things that one of the big donors said to me, he said, Mike, everybody wants you to be head of the RNC, some of them just don’t know it yet,” he told Bannon.

Despite rumors, rumors, Lindell said that Trump did not endorse his run, and he has not passed it by the 45th president.

Lindell isn’t the only public conservative to demand McDaniel be replaced at the top of the Republican Party.

"I don't know if a party can continue to lose like we have and keep their jobs." pic.twitter.com/IGmFer7Ppa

It will be an uphill battle for the My Pillow CEO. McDaniels already has most of the support she needs to return to her job as RNC chairwoman.

“These are perilous times and the Biden presidency, abetted by the extremist consensus among Democrat Party elites and elected officials, has been, is, and will continue to be a disaster for our nation,” the letter endorsing McDaniels said.

“We believe we must elect a Republican President and more Republican Senators and House members in 2024 to restore, preserve, and protect the United States of America.”