[Must watch] Someone show Nancy Pelosi this video - immediately! - The Horn News 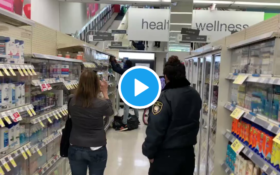 While Democrats in Congress are concerned about what Republicans colleagues across the aisle are doing, pure lawlessness is unfolding right in their own backyards.

And the latest video to hit Twitter proves it.

In the very city Speaker Nancy Pelosi, D-Calif. represents, a shocking encounter was captured on camera. Inside a San Francisco-area Walgreens, onlookers watched as a thief rode into the store on a bicycle and calmly filled a large garbage bag with shoplifted goods.

The suspect hardly faced any resistance as he sped off on the bike. The store security guard can be seen recording the incident, before making a halfhearted attempt to deter the crime.

“This just happened at the @Walgreens on Gough & Fell Streets in San Francisco,” she wrote. “No Consequences.”

This just happened at the @Walgreens on Gough & Fell Streets in San Francisco. #NoConsequences @chesaboudin pic.twitter.com/uSbnTQQk4J

Critics noted that this disturbing example is another example of the degradation of San Francisco recently.

And according to a New York Times report, Walgreens in particular has been an epicenter of petty crime, noting that the popular chain was forced to close “17 stores, largely because the scale of thefts had made business untenable.”

Police say that politics in the city are to blame for the thievery in San Francisco.

A legal measure in 2014 purportedly encouraged law enforcement to stand down and largely decriminalized shoplifting under $950. Critics say the move emboldened thieves and criminal gangs.

District Attorney Boudin recently blamed the police and accused law enforcement of refusing to crack down on the shoplifting epidemic in order to remain racist in an interview with the local CBS News affiliate.

“The reality is the POA [police officers union] needs someone to point the finger at and this isn’t a new issue,” Boudin said. “Look they were blaming [Vice President] Kamala Harris and attacking her when she was the district attorney. This is an age-old problem in San Francisco because the POA wants to get away without doing their job.”

“They want to get away with allowing their officers to send racist text messages, to use excessive force against the community, and to engage in systematic violations of civil rights of Black and brown drivers on our streets. And I’m pushing back and demanding that they modernize, that they reform, and that they respect all the members of our community.”

And Pelosi, one of the most powerful politicians, is ignoring the major spike in crime completely.

Will her voters ever hold her accountable for the lawlessness?