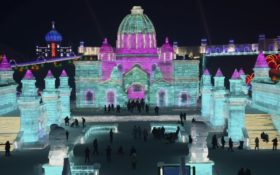 Ice sculptures of Moscow’s Red Square and Bangkok’s Temple of the Emerald Buddha are among landmarks featured in the world’s largest ice festival.

Some of this year’s displays center on Chinese President Xi Jinping’s major foreign policy and trade initiative, the One Belt One Road, an ambitious plan to link Asia and Europe with a network of railways, ports and other infrastructure.

“Back then, through the Silk Road, exquisite art works from China like potteries were transported by camels and horses to the Western world,” Han said.

Main activities start this week and the festival runs through late February, with heavy crowds expected during Lunar New Year celebrations, Feb. 15-23. Temperatures at this time of the year can dip below zero Fahrenheit (minus 18 Celsius).

One park, the Harbin Ice-Snow World, features more than 2,000 ice sculptures made from 180,000 cubic meters (240,000 cubic yards) of ice collected from the Songhua River by nearly a thousand workers. In the evening, sculptures are lit with colorful lights.

“Art has no borders,” Han said. “It’s an abstract language. We communicate with our works in this international competition. It means a lot.”