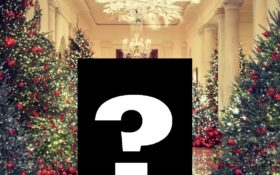 Taken during the official White House Christmas Ball on Dec. 15th, the picture features the formally dressed Trumps flanked by an array of beautiful Christmas trees.

On the ceiling in the White House’s Cross Hall, the ceiling is illuminated with snowflake patterns to complete the dazzling display —

The two are in a more intimate setting at the Vice President’s house in Washington, D.C. next to their family Christmas tree.

Behind the smiling couple is a fireplace with hanging stockings and a mirror decorated with a quote from the classic poem, “Twas The Night Before Christmas.”

We wish you a very Merry Christmas! The @VP and I took our official 2018 Christmas portrait on Saturday, December 8, at the Vice President's Residence at the Naval Observatory in Washington, D.C. (Official White House Photo by Myles Cullen) pic.twitter.com/Lo72EfA3jI

Isn’t it nice to finally have a White House that isn’t afraid to say, “Merry Christmas”?