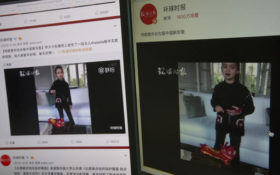 A brief video clip of Donald Trump’s granddaughter singing in Chinese is circulating to strong approval on the internet in China.

Arabella singing a song she learned for #ChineseNewYear. Wishing everyone an amazing year to come during these days of celebration. 新年快乐！ pic.twitter.com/jxHHLvhmzm

On Wednesday, Ivanka and Arabella made a surprise visit to the Chinese Embassy in Washington to take part in the festivities, a photo of which landed on the front page of the official China Daily newspaper Friday. Arabella had already drawn considerable attention in China in November when a video clip of her reciting an ancient Chinese poem lit up the internet.

While the Trump women received praise, the lack of a greeting from the president “triggered heated discussion” among the Chinese public over the possible ramifications for bilateral relations, the official newspaper Global Times said Friday.

“Some Chinese (internet) users felt Trump was being disrespectful by not sending a greeting,” the paper said.

The Lunar New Year, which this year fell on last Saturday, is China’s most important traditional holiday, a time for family gatherings, feasts and the exchange of greetings between relatives, friends and work colleagues. It is also celebrated in several other Asian countries and among Chinese communities worldwide.

Comments on the internet largely focused on what many Chinese view as a hawkish attitude by Trump and his administration toward China, with many saying the lack of a greeting should be seen as a deliberate snub.

Trump has accused Beijing of manipulating the value of its currency to gain an advantage in trade and threatened to impose a 45 percent tariff on imports from China. He’s also criticized China’s military buildup in the South China Sea and accused Beijing of doing too little to pressure neighbor North Korea over its nuclear and missile programs.

China has rejected the accusations and has in fact been spending heavily from its pile of foreign currency reserves to prop up the value of its currency, which would make exports more, not less, expensive.

On the streets of China’s financial hub of Shanghai, residents were full of praise for Ivanka and her daughter, while mixed on the significance of the lack of presidential greeting.

“A bridge of friendship is needed between China and the U.S.,” said Chen Zhijun, 30, who works in gold sales. Not sending a New Year greeting, he added, “definitely is not helping. Maybe it is because he is new and has too much to deal with.”

“I’m glad to see his daughter and little granddaughter being friendship messengers … it is a sign of being nice,” Chen said.

A 35-year-old bank worker who gave only her surname, Yu, said Chinese needed to shrug off any perceived slight and doubted whether the lack of a greeting would have any substantive impact.

“We should have the mentality of a major country and have the confidence not to be bothered about this,” Yu said.